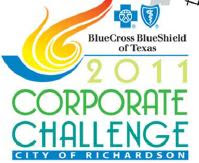 I was up *bright and early* for my first running race!!
Pre-Race Game Face: 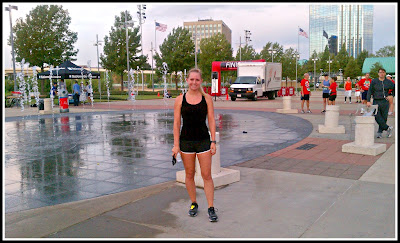 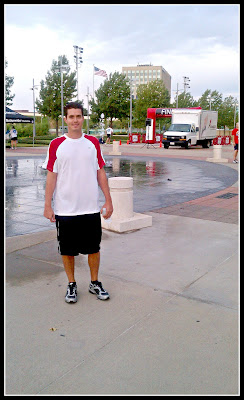 {Dear Lord WhydidIletthiscrazygirltalkmeintothisrace???}
Most Importantly --> I  WE COMPLETED THE ENTIRE 5K RACE WITHOUT WALKING!!! 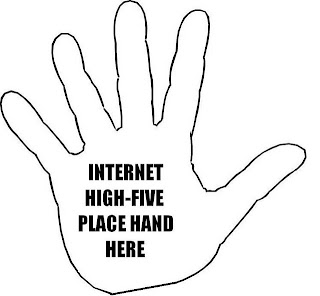 Let's start back with the training for this race...
It wasn't too formal, I really didn't want to psych myself out -- I reminded myself it was just a 5k.  I ran 2 miles several times, and ran 2 5k's inside on the treadmill with ~10min average miles, but up until two weeks before the race I was slightly unsure I could complete my 5k outside.  Texas heat had been scorching lately with 110+ degree highs leaving me little practice on outside runs.  Luckily, a week and a half before the race, we got a slight break in extreme temperatures and had an evening at a cool 93 deg F.
Yes.. that was cool to me!! And there was even a nice breeze to go along with it!
So Mike and I got all geared up to complete our first outside 5k...

"Let's Do This Thing!!!!"
We finished out outside 5k in 29 minutes - yipee!!!!
Although, I have to say, by the end of that I was huffing and puffing like The Little Engine That Could! 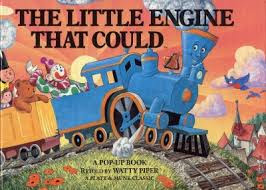 {source}
Accomplishing this 'Test Race' really helped me calm my nerves and have confidence going into the race that it was possible and that I could do it.  The week before the race I completed one smaller run and tried to eat a healthy diet of proteins/carbs/veggies including a protein shake each morning.
The day of the race Mike and I had our new favorite version of our favorite protein shake!! 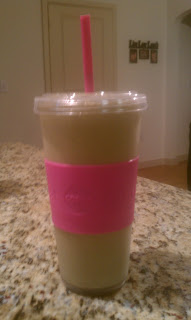 Email ThisBlogThis!Share to TwitterShare to FacebookShare to Pinterest
In this post: Corporate Challenge, Fashion Advice, Protein Shake, Question for the Day, Race

Sunday September 11th was our 15k Bike Race as part of the Corporate Challenge.
I signed up for the Bike Race and the 5k Run and they are the first races I've ever competed in as long as you aren't counting Elementary School where I was downright legit at the water balloon relay.  Word. 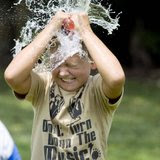 I probably got into biking around January when the BF and I decided to look into getting bikes.
We went to our local Richardson Bike Mart and told the salesman we were total NEWBS and looking for beginner bikes.. he nods his head as if he understands us and says "Ah yes, so the SUB 1000 range..."
Sub $1,000 ?!?!?!?!?! Ummm.... WOW. I really was under the impression a $300 bike was a lot of money.  I mean... I still have to be able to afford shoes... 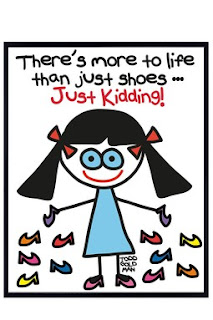 So I get completely schooled/versed on bikes and read a lot of stuff online but I still can't part with the money for a nice road bike -- I ended up going with a hybrid Men's DiamondBack but I absolutely love it. 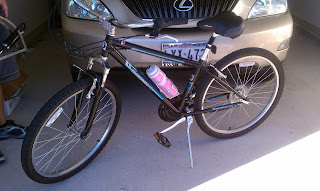 It cost me a little less than $300 from Sports Authority and came with a free tune-up in the first year.  I like that my seat is more cushion-y than actual road bikes and that my handles bend back slightly so I can sit up straight when I'm riding.. it's a lot more comfortable.
That being said, racing is not about being comfortable - so I decided to rent a road bike for my race. 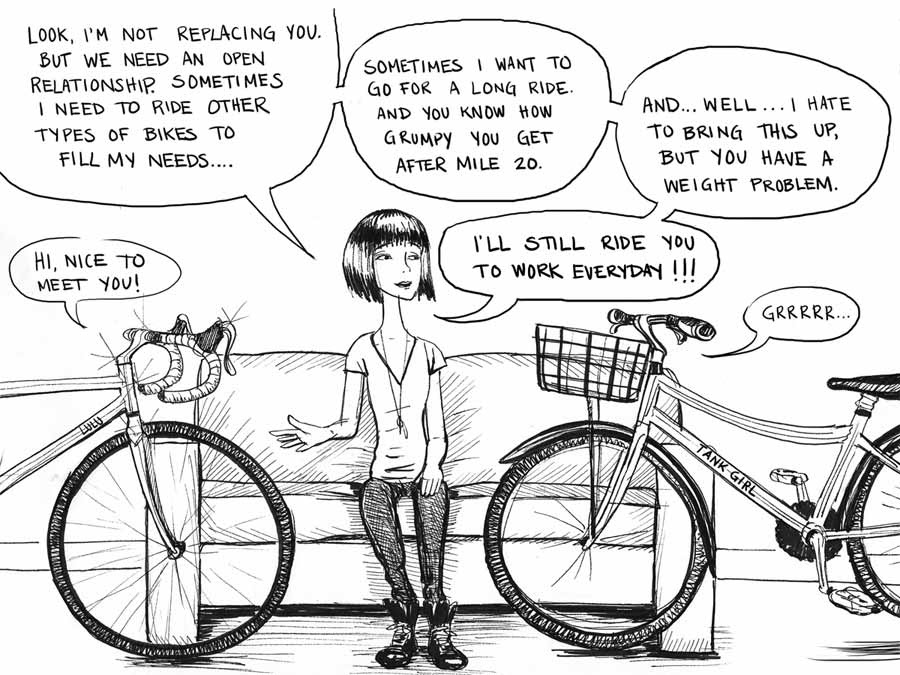 I was able to pick up the bike a day early which was a fabulous idea since I'd never ridden an actual road bike before -- but how difficult could that be?
VERY DIFFICULT.
The first 20min spent on the bike involved me thinking to myself on repeat "Please don't die! Please don't die!"
There was also a "Why am I not wearing knee pads? Elbow Pads?" and an "Eeeekkkkk!!!"
The bike was measured to create an optimal angle on my leg when riding, but this meant that it was slightly too tall for me to really stand over the seat - I kinda had to hop on and off which was even more difficult considering the fact that these Trek road bikes don't have kick stands.  I am CLUMSY. So clumsy I had the guy trade out the strap-in pedals for regular ones before I'd leave the store.... I don't need to be tied down to my bike when we both go down. Sorry, every man for himself. 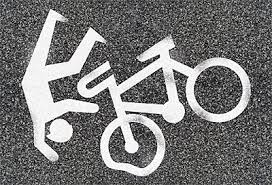 {Stupid Bike!!!!}
Once on the bike you realize it's way way lighter than the bike you've been riding and it causes you to have trouble finding your equilibrium.  I felt shakey for the first 5min straight.
That being said, this thing flies. 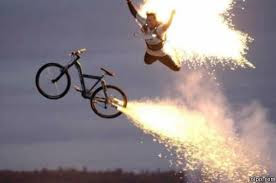 I spent most of my first ride applying the brakes until I could overcome my fear of going head first into a wall/car/speeding airplane.
*Anyways*
I got used to it and felt ready enough for race day!
{Click Keep Reading for more of my Race Recap!}
Keep Reading ...
Posted by *Sparkles* at Tuesday, September 27, 2011 2 comments

Email ThisBlogThis!Share to TwitterShare to FacebookShare to Pinterest
In this post: Biking, Corporate Challenge, Cycling, Question for the Day, Race 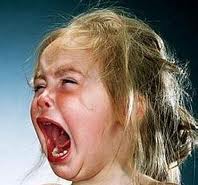 She does NOT look happy to be here.
The title of this post will make more sense by the end.. or not, but at least it should :)
First of all, let me appologize for being MIA lately, I will try to make up for it with multiple "catch-up" posts -- this has been my desk at work lately: 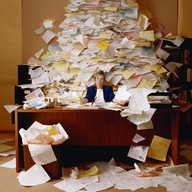 No Joke.
When people talk to me and ask where I've been my new response is "Running around like a chicken with its head cut off" 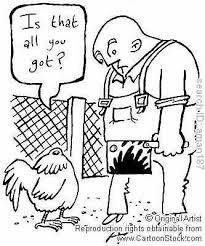 {source}
Sorry for the vivid picture -- but that's all I can compare it to.  I feel as if I'm so busy I'm constantly running, but my brain is so fried it's practically not useful at all.  Hence, head cut off chicken...
*Anyways*
Today is Mike & My 2 Year Anniversary!!!!!!!! 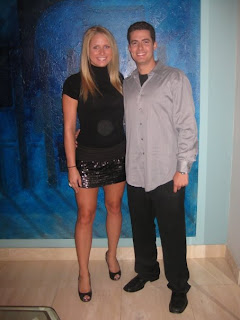 Just dating Anniversary, but still... it's big to me :)   Well, and its the official dating Anniversary.. we actually started dating in June 2009 but I wouldn't let him call us official yet because I wanted him to prove his knightly worth  -- so archaic of me, I know, but it turned out well!
Since it's such a joyous day, I decided to carve out time for a post.
And in celebration of thus post I shall be performing this office inappropriate workout to burn maximum calories that I can then fill as I drown myself in Italian Pasta happiness tonight for a celebration dinner... 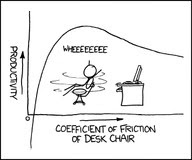 Speaking of delicious calories, if you haven't tried Chocolate Covered Katie's BOATMEAL (Baked Oatmeal) I tried her Cinnamon Roll version (sans icing) and it was DELICIOUS. 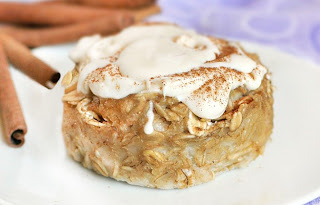 Highly recommend those calories!!!!!!
Not that I think anyone should be overly concerned about calorie consumption, but personally I do have to keep myself in check.  Otherwise I'd be a mountain.
Please Click to Keep Reading...
Keep Reading ...
Posted by *Sparkles* at Wednesday, September 14, 2011 3 comments